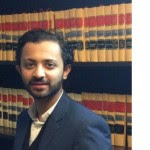 Umer Gilani is a Partner at The Law and Policy Chambers and an Advocate of the High Courts of Pakistan. He is a graduate of LUMS and the University of Washington School of Law. Previously, he has assisted Justice Jawwad S. Khawaja at the Supreme Court of Pakistan and held research positions at the Federal Judicial Academy and the Prime Minister's Legal Reforms Committee.


In addition to pursuing active legal practice, Mr. Gilani invests his time in carrying out empirical legal research on Pakistan’s pressing legal challenges. His studies, which are listed below, are based upon a scientific methodology and have thus won wide recognition amongst members of Pakistan’s judicial and legal community.


- Towards an Empirical Study of Lawyers’ Strikes

- A Statistical Study of the Life-Cycle of Cases in Civil Courts (SCP: 2011)

The Struggle of the Residents of Islamabad’s Katchi Abadis, Bertha Foundation Blog (2016)

Op-eds in The News: http://www.thenews.com.pk/writer/umer-gilani


Media Appearances
TV Appearances
Capital Talk by Hamid Mir, Geo News, 30th August, 2016. I was interview about the legal dimensions of the Missing Persons issue on the country’s most widely-viewed TV show.


I have been cited in over 100 newspaper reports in Express Tribune, Dawn and other reputable papers in connection with cases which I plead at the Islamabad High Court. These professional citations can easily be located through any online search engine. I take care to publicize only those cases where the client specifically authorizes me to go public with its case and where the case stands to benefit from media attention.